Navis is used in chemical petrochemical, food and pharmaceutical industries.
Remarkable examples of systems, in the chemical industry, which adopt Navis as supervision system: 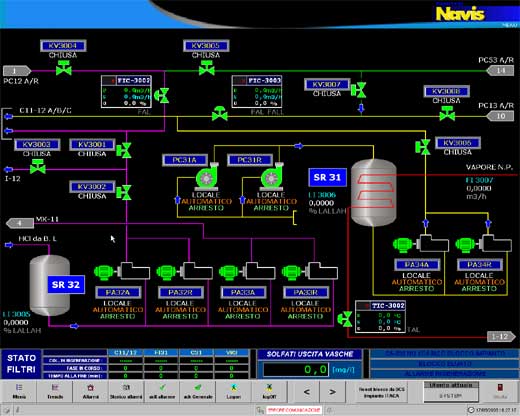 Integrated Display and control of multiple production lines of resins for the plastics industry.
Each line is handled by a Navis system distributed over a TCP / IP network, which captures tens of thousands of variables from different instruments that detect the values ​​of the field. The display of the system status in the control room is ensured by a series of Navis stations (operator places) each of which absolutely complete with all the necessary functionality to the panel builders, and independent of all others. The model of the plant, reported on more than 100 pages of display panels, is animated with the most modern and intuitive on-screen representation techniques.
System developed at:
Polynt S.p.A. of San Giovanni V.no (AR)

View and control with more Navis stations of different system blocks refineries.
System developed at:
DOW S.p.A. (Former Enichem)
Priolo Gargallo (SR)
Realization of a highly versatile and configurable system for the control of the reaction on a pilot plant used for the fuel additives experimentation.
The testing requirements necessary to research led to the development of an application Navis (distributed across multiple stations in TCP / IP network) that the researcher left free to vary at will the states and system configuration. Also notable is the reporting system designed and produced entirely by the integrated development system Navis.
System developed at:
ENI Technologies (formerly PROJECTS SNAM)
S. Donato Milanese (MI)

System of acquisition, storage and display of trend, for a significant number of analog signals need to be considerably lower sampling times.
System developed at:
SOL S.p.A. Piombino (LI)

TrendsGroupManager new look waiting for the 3....
View All